Posted from near Ingram, TX
(Click on Pics to Enlarge)

We left our winter home at Palm Creek Golf and RV Resort in Casa Grande, AZ on April 15th.

We'll eventually be heading to the east coast and northeast for the summer months, but that's no reason not to slow down and visit some areas along the way.  We've been traveling with our friends Paul and Laura for the past two weeks and having a blast.

Paul suggested that he'd like to visit the Big Bend National Park area in southwest Texas, so we decided to tag along.  (Thanks guys for putting up with us!)

We both like to drive short days and miles, so we stopped at the SKP park in Deming, NM the first night, then at Desert Willow RV Park in Van Horn, TX the next night. Nothing special at either park, just nice places for an overnight stop.

Our destination to visit the Big Bend National Park and area was Maverick Ranch RV Park in Lajitas, TX.  A nice park, probably the nicest in the area, and great for exploring the area. If you've never been to this area bring plenty of groceries as choices are limited and expensive. The area is beautiful, however.

We visited the Lajitas Golf Resort (part of the RV park) across the highway.  I don't golf, but the course has beautiful surroundings.  The resort has a lodge, restaurant, bakery (great cinnamon buns), and other amenities.  Our RV park has a nice swimming pool with great natural views. 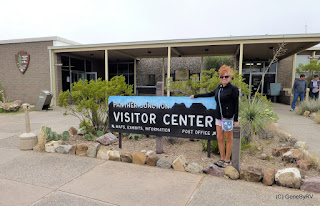 We explored the Big Bend National Park on three different days.  This is a very large park, so multi-day visits are a must.  We attempted to visit a different part of the park each time after first orienting ourselves and picking up valuable information at the Panther Junction Visitor's Center.

Each day we packed a picnic lunch and ate at a different area within the park.  As already stated, the park is very large.  The first day we headed down toward the Rio Grande Village area and hiked along the Boquillas Canyon Trail.

At the overlook, Mexicans across the Rio Grande River have set up spots to sell their wares.  They are pretty trusting, because the cash container is unattended.

After a short trek up the trail we made it to the edge of the Rio Grande River.  Due to the steep canyon walls, the wind was really blowing in this area. 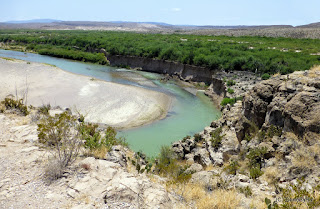 I wondered why the name Big Bend National Park. I learned that the park got its' name from the "big bend" the Rio Grande River makes in this area.

While in this area of the Park we decided to take in the Hot Springs near the Langford Ruins.  After a short trek, we dipped our toes into the remains of the springs. The temps were about 104 degrees, but very soothing after doing a bit of hiking.

So as not to make these next few blog posts too lengthy, I've decided to include a few pics around the Park, then split our adventures up into several future posts.

To view many additional pictures for Big Bend National Park (Day 1) just click on this link to go to our Google+ Photo Album.

Thanks for stopping by to take a look!

End of the Winter Pickleball Season


We arrived at Palm Creek Resort, Casa Grande, AZ on October 15, 2015.  This is our winter home and this year we had the added bonus of co-hosting the USAPA National VII Pickleball Tournament with Robson Ranch Resort. For any pickleball player, this is the mecca of tournament play. (Just as a side note, Palm Creek Resort will be solely hosting the 2016 and 2017 National Tournaments.)

The National tournament is divided into "Open" play in which you must be a 4.5 or 5.0 player to register to play, or register in an "Age Group" such as 18-35, 35-50, etc. When playing as partners, the team always has to play in the skill level of the highest rated player, or in an age-based tournament, the age of the youngest player on the team is used.

I state the "ground rules" so that it will be a bit easier to follow the rest of this post.


This season I played all but one tournament with Bill Pitzl.  It really is a lot easier to play together for an extended period of time versus picking up new partners for each tournament.  We entered the National Tournament in the 55-60 age group category with the goal of winning one match. Seems like an easy goal to accomplish until you consider that each age group can be comprised of any skill level from a 2.0 up to a 5.0. At this point in the season, both Bill and I were rated 3.5.


I am very happy to say that we accomplished our goal by winning our second match of this tournament before losing the third match (in a double elimination format).

Our next tournament entered was the Voyager Open Skill Tournament near Tucson on 12/4/15.  We finished one round short of the medals, but we were generally happy with our play.

On 1/30/16 we competed in the 5th Annual Mission Royale Tournament in Casa Grande.  Again, we finished one round short of the medals.  Not as impressed with our play in this one, though.

In early February, our Palm Creek Pickleball Club has an "in house" tournament in which only members can participate.  Because our play earlier in the season had been pretty good, the tournament director moved us up into the "4.0" level.  (Just for this tournament, as the member tournament is NOT a USAPA sanctioned tournament.) I played again with Bill in the 4.0 Skill Level division, but we failed to medal.  I also participated in the "Age Group" 4.0 Level with a different partner named Rick Deweerd.  Rick is definitely an up and coming player and we were able to take a Bronze Medal in the 4.0 Level, Age 50-65.


Our first large tournament of the season was the 13th Duel in the Desert held at Palm Creek. We played on March 4, 2016 and I again partnered with Bill in the 3.5 Level.  We were able to win a Silver Medal in this tournament.  Our first-ever win as a team.

Here's a short video clip of just one point in the Gold-Silver match for the Duel in the Desert.

We must have been on a hot streak as we also took a Silver Medal in the 6th Fun in the Sun Tournament up in Sun City West, AZ.  We lost to a very tough team in this one.

Our final medal of the season came in the 4th Robson Ranch Tournament held on March 18, 2016. We again took the Silver Medal and were probably the happiest with our play in any tournament of the season in this one.  There were 31 teams in our division alone for this tournament.


The final tournament of the season was at an inaugural tournament at the Encanterra Country Club up in San Tan Valley, AZ.  We got off to a bad start by losing our first match, but managed to fall just one match short of getting into the medal rounds from the "losers bracket" in this one.


Bill and I were very pleased with our play for the season. We started the year wanting to medal in some of the larger tournaments for our skill level. We missed the medal round by one match in 3 tournaments, and won the Silver Medal in 3 additional matches.  We felt that our level of play progressed as the year moved along.  Apparently, the USAPA ratings committee agreed as we were both moved up to the 4.0 Level as of June 1, 2016.  (Good, and bad.)  Now we'll be playing against tougher competition in every tournament next season! 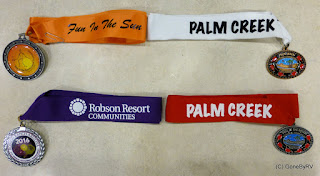 We weren't the only ones playing pickleball here this season.  I have to mention Karen and her partner Debi Pitzl (Bill's wife) who competed in their first tournament together at the Robson Ranch Tournament on March 16th.  Although they were both admittedly pretty nervous, they did fine together and hopefully will be playing together in future tournaments next season.  They both agreed that they had a good time together.  In the end, that's what playing pickleball is all about.

Thanks for stopping by to take a look at this lengthy post.
Should you have any questions, please feel free to leave a comment below.
Posted by Steve and Karen at 9:14 PM 4 comments: